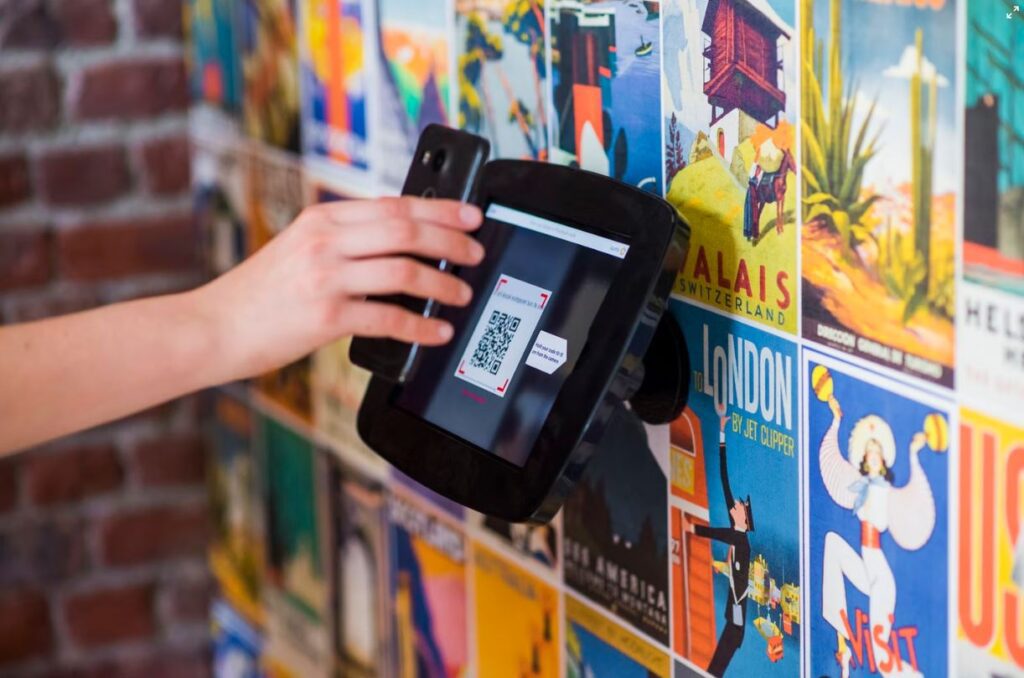 With the rise of QR codes in day-to-day life, it’s time to tackle the topic – QR Codes vs. Barcodes. Which is better? Or are they just tailored towards different situations? Barcodes have been around since the middle 1900s, and has become commonplace in daily life. Every store uses them, and even places like hospitals, to identify patients.

In comparison, QR codes are fairly new but have been booming in popularity, popping up in every industry.  From entertainment to health and marketing, QR codes have a wide range of uses—especially compared to barcodes. Anyone can whip out their phone and scan a barcode, which makes it accessible.

Is the time of barcodes over now, with QR code usage on the rise? Read more to find out! We’ll cover the benefits of both in this article, and try to answer the age-old question. If you’re trying to figure out which would be best for your business (or even personal use), our article will list out the advantages of both to help you come to a decision.

What exactly are barcodes? 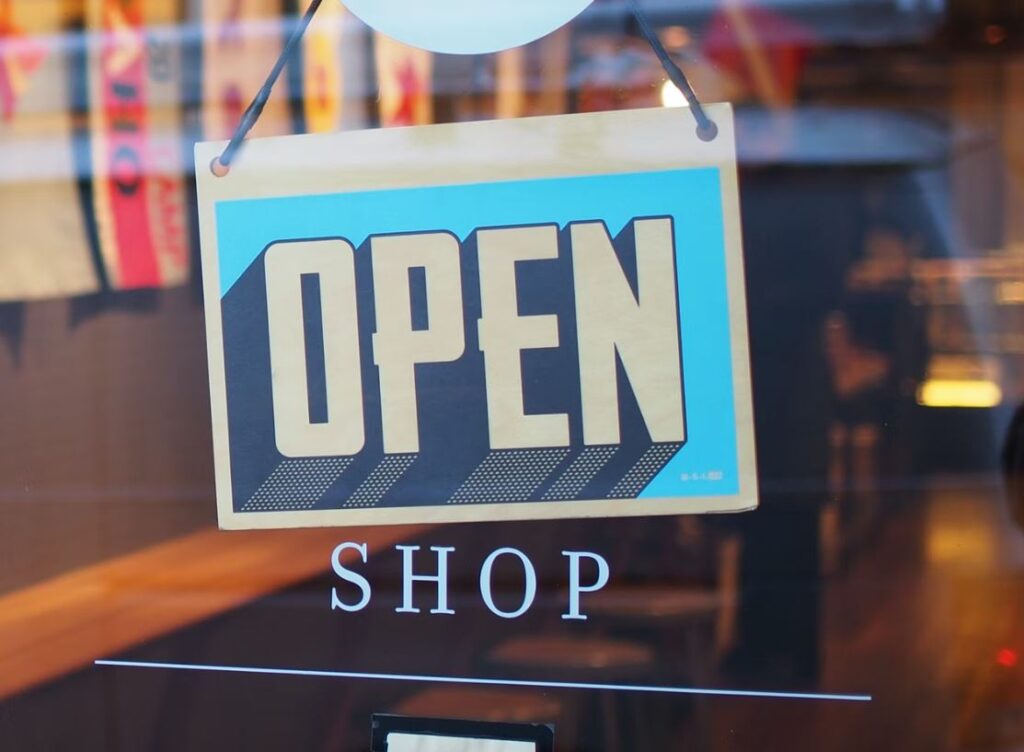 Barcodes are actually not too different than QR codes, and work similarly. However, the biggest difference is they can’t store nearly as much data. Barcodes only hold information in a line/horizontal dimension, which limits the amount of data to just one stretch of stripes. Whilst QR codes are both up and down, so they can contain more information.

So, what exactly is a barcode? It’s just a machine-readable code that is made up of numbers and a pattern of lines that gives information when interpreted. For example, this might be a product code. When you go into a store, every item has a barcode on it. This is then scanned by a computer, which reads the barcode and the information it’s storing to figure out what you’re buying and the price.

Did you know? Barcodes have been around for decades, dating all the way back to the 1950s. It was actually based on Morse code. There are variants that use other shapes or patterns, however, the parallel linear design is the most commonly used in everyday life.

Even parallel linear barcodes have different designs. For example, there are UPC does, which can be read in any direction. This design specifically helps combat the typical disadvantage of barcodes being more finicky to scan.

Whilst it doesn’t come close to containing the amount of information a QR code offers, the GS1-128 version of barcodes can store extra information, like dates, batch number, etc.

What is a 1D barcode? How is it different to a 2D barcode?

Great question! And fortunately—we have the answer for you. A 1D barcode is the typical, linear design that you see everywhere. Linear barcode data is scanned using a laser, typically.

2D barcodes resemble QR codes in their design, and instead are scanned using an imager. These imagers can also be used for 1D barcodes.

As the name suggests, 1D barcodes stores data going from left-to-right in one dimension. 2D barcodes add in another dimension to allow for more data. This also allows for more information to be stored, similarly to a QR code. Fun fact: QR codes are technically 2D barcodes! However, when people talk about 2D barcodes, they’re usually referring to a data matrix.

When it comes to data matrix vs QR codes – the winner is obvious. QR codes can still hold more data than data matrixes (2D barcodes), and more diverse range of uses.

How do QR Codes work? 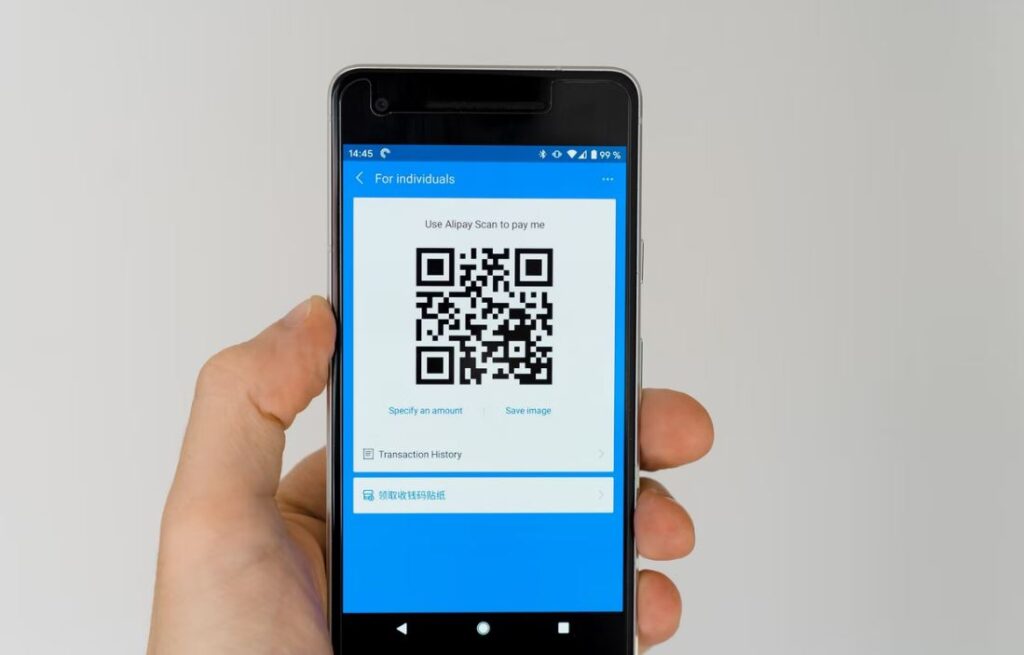 If you’re not sure what a QR code is, it stands for “quick response” code. It is a square image consisting of patterns and/or black/white lines that store information or data. They are most commonly used for storing URLs, or even for taking payments.

When scanned by a camera (on your phone, for example), it reads and interprets the data on the QR code. It was first developed back in 1994, but has only become popular in use in more recent times.

There are multiple versions of QR codes. For example, kanji, alphanumeric, and binary. If you want a more in-depth look into QR codes, you should read our how does a QR code work article.

Most recently, QR codes have been popularly used by companies for marketing purposes. Such as including them in advertisements, so customers can easily find their website or relevant information.

It’s also widely used for entertainment purposes, like finding games or movies. It isn’t just limited to that, though, as mentioned earlier, QR codes are also popular for transactions. It’s a completely safe and secure way to pay for your groceries!

It has even found its uses in the medical industry, particularly with the pandemic. It can be used for tracking purposes, as people can just scan the QR code instead of having to write down their details every time they go into a store, for example.

Just like barcodes, QR codes can come in a range of different designs and types. For example, there are micro-QR codes, which are pretty self-explanatory. There are even dynamic QR codes, so you can change/edit where it sends the user—even after it has been generated! Need to change the link on a QR code your company has put up months later? You can! Compared to a barcode, it’s much easier to “modify/rewrite.”

What benefits do barcodes offer? 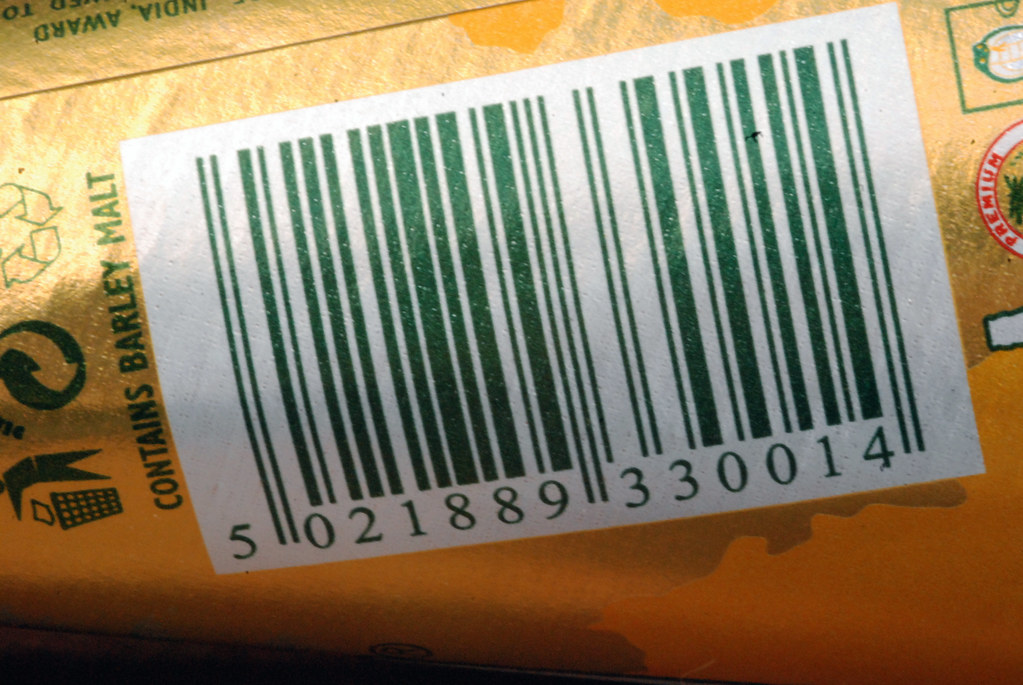 What are the advantages of using QR Codes?

The biggest advantage of a barcode is that they are cost-efficient. Especially if you’re running your own business or store, it’s cheaper to get a device that scans barcodes. It’s also great for use for inventory tracking. It’s also extremely efficient and fast to read. Adding a barcode to a product isn’t hard to do, either. Also, QR codes can’t be read on rounded surfaces, whilst barcodes can! So if you’re selling anything rounded or cylindrical—like a can—barcodes are the way to go.

Barcodes are also pretty secure, especially compared to QR codes—where someone could easily send you to a malicious website. They’re also popular for use in environments like libraries, too. Barcodes can also cut down company costs in the long-run, as well as saves you time/money on labor. Instead of individually counting out stock, you can just scan it! It also allows for more accurate inventory control, as the products would all be counted/tied to barcodes and a computer system—which means lowering room for error.

Here are a few examples of where barcodes come in handy: 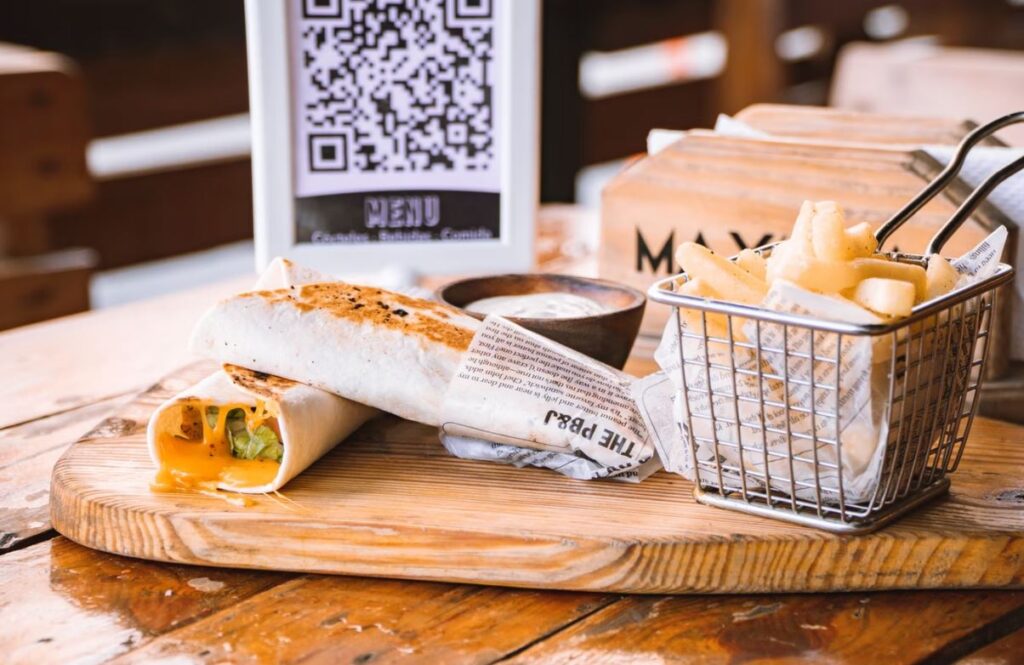 The biggest advantage of QR codes is that they can hold more information than a barcode can. Where barcodes can hold up to 25 characters, QR codes can go up to 2500! For example, this means you could even put a URL in your QR code, or product descriptions along with their title. This makes it amazing for adding more in-depth info.

On top of that, QR codes can also be printed way smaller than barcodes. They’re more space efficient, whilst also providing more information to the user/scanner. They can also be scanned from more angles than a barcode can—which has to be read in line with the code.

Here are some examples of what you can store in a QR code:

Best of all, when it comes to damaged or scratched codes—QR beats out barcodes. They have a higher rate of error correction, which goes up to 30%. So, even if the QR code is slightly damaged, scratched up or even dirty – it can still be scanned. Even compared to 2D barcodes (data matrix), QR codes have a better error correction rate.

Wondering how that works? It’s because the pixel parts in the QR code are doubled up in the design. So, if the design is slightly damaged, the other parts of the code make up for it and still allows for the data to be read. It essentially “backs up” the data.

Which one is the best? 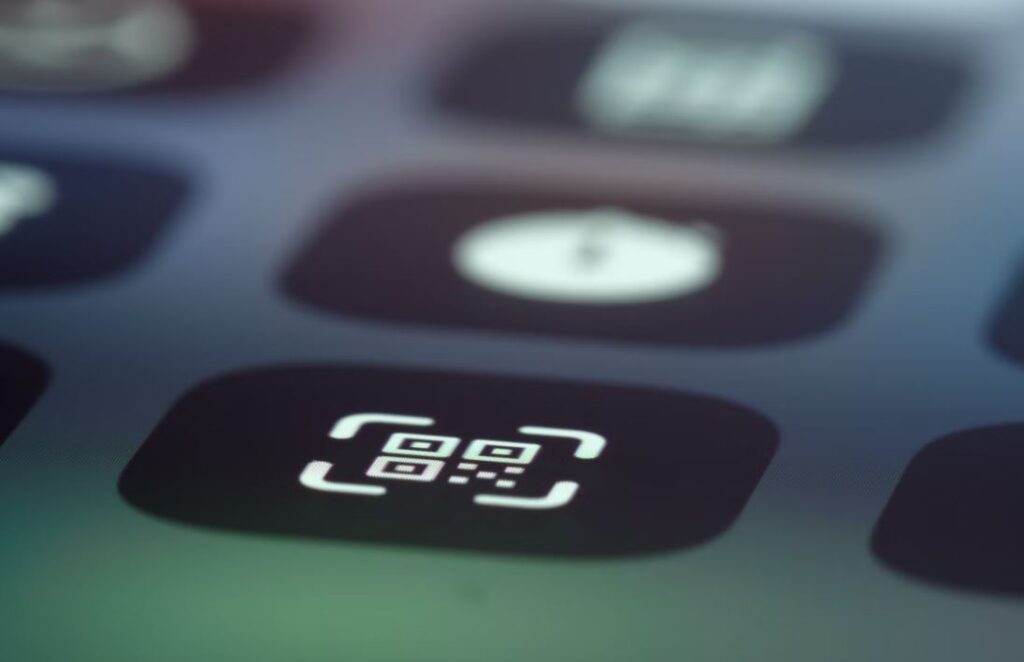 So we’re at the finale. Which is better when it comes to QR Codes vs. Barcodes? The obvious winner when it comes to function are QR codes. They allow you to store more data, have more use cases. They can be used for anything from marketing and sharing websites to even secure transactions.

However, when it comes to affordability—barcode is still the cheaper option. If you just need a solution for tracking stock or selling products in a store, it’s the better choice. It can also be used on rounded items, whereas QR codes can’t.

Where QR codes win is if you’re looking to give more information to the user, or even for marketing. The technology to scan QR codes is also super accessible, nearly everyone has a smartphone with a QR code scanner built into their camera app. Especially after the pandemic, so many countries used QR codes as the main form of tracking.

The biggest difference between QR codes and barcodes, too, lie in how they’re used. QR codes can be placed anywhere and used by anyone, whilst a barcode needs to have the machine configured to read its data. This is what makes it great for businesses/stores, however, it can’t ever be used in the same context as QR codes. You can’t just scan a barcode on your phone and have it lead you to a website.

Whereas, QR codes can be used as a replacement to barcodes. There’s nothing stopping a store from using QR codes to keep track of their inventory, and it could even be configured to let customers read additional information on the product they’re looking at.

Some other good use case examples for QR codes in the professional field are:

Unlike barcodes, QR codes can also be made as large (or as small) as you need. They can get as small as 2 x 2 centimeters whilst still being readable. Compared to the smallest barcode, this makes it useful if you want to put it on smaller products, or even put them on tags.

If you want to give making a QR code yourself a try, you can do that on our home page! We offer a QR Code generator, which allows you to set up your own in just seconds! You can even change the style/design, and have it link to a URL, Wi-Fi settings, and more! You can track the statistics too.

Generate unlimited dynamic QR codes and keep track of how many people scan them, from where and on what date.

Get Dynamic QR Codes, Scan Analytics, and More.  Upgrade now by clicking below: